Today I wasn’t on the computer much, but when I was I was reminded of the many times that Robin Williams made me laugh. What the first movie I saw him in was, where I saw it and who I was with. That made me think of all the movies I have seen him in and I was reminded that even my children see him as a great actor, one of their favorite movies is Night at the Museum. Robin Williams was a phenomenal actor…a great comedian… 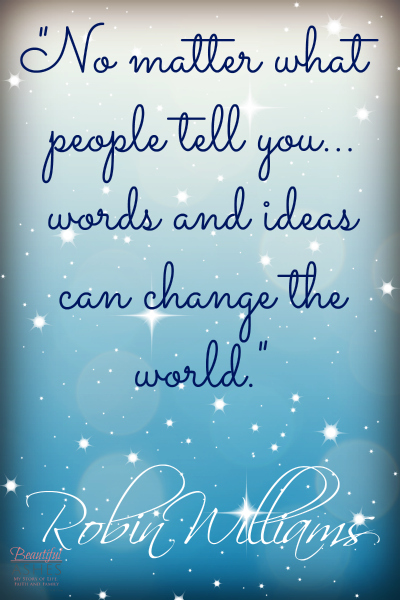 Sadly, over the last few years we’ve seen some great actors that struggled with depression and in the end chose suicide as the way to end the pain. Why is it that we think that because they have the life of an actor/actress that they’re not prone to struggle with the very things that we do? Do we really think that the money and fame that are a part of their lives keeps them from feeling or dealing with life the way we do? After all, aren’t we human just as they?

Depression isn’t picky. It doesn’t just prey on the “normal” every day people. It doesn’t care if you’re in the USA or a country far across the ocean from me. Depression doesn’t just happen to the weak of heart, it can take over a trained soldier that’s serving miles away from home.

The pain of depression overwhelms every part of you, your heart, your mind, your strength… It doesn’t leave any part of you alone.

It shows up when you least expect it, sometimes even just after you’ve had an on top of the world experience. There is no telling when it will come or when it will go.

Suicide is one of the darkest thoughts and places depression can and probably will take you. Thoughts begin to swarm inside your head…of loved ones being better off without you, your value not being worth living, the one you love not caring if you’re alive or dead… These thoughts are deadly and all too often they are what many listen to and believe.

Why do people believe these things? How can they not see that they are needed and wanted?

Suicide isn’t a choice made by only the young or the famous. It isn’t chosen by non-Christians only. Suicide can be anyone’s choice. It can be a choice made because of the depths of depression, bullying, relational abuse, alcohol or substance abuse, and on and on the list can go. There is no list to follow to keep from having suicidal thoughts. It is a battle in the mind that must be faced with counseling, support, love and grace.

Many that choose suicide are often those that have big hearts…they help others…it’s a part of who they are. Yet, carrying everyone else’s burdens and pushing them towards the light is not easy. Especially because those with big hearts often don’t seek help for themselves or they don’t receive help from those that they need it from. 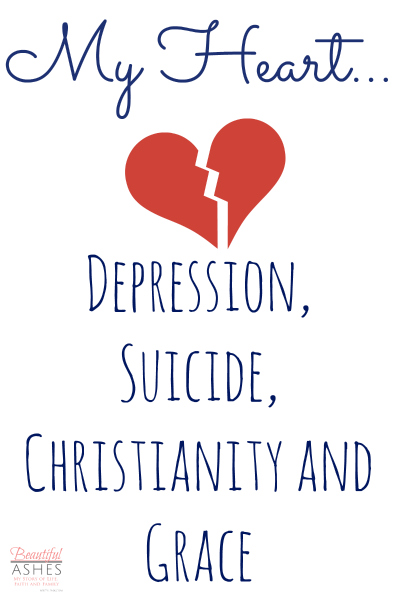 Christianity is often not filled with grace. It’s what we all need, but not something we give out easily. Sure, we accept it from God because without it we Christians would be lost, but somehow we forget that it’s a gift. A gift that is meant to be given out again and again. We don’t deserve it, so how can we decide who we should or shouldn’t give it to?

As Christians, we are called to make a difference in the world. We’re not here to just occupy space and just bide time until Jesus comes. We’re supposed to be touching others with the love Jesus gives to us, with the grace that’s been given to us and offer it to them.

When suicide takes someone away, how do you react? Do you mourn for the loss of another person in this world? Do you pray for the family that has been left behind?

Oh, that Christians would rise up and pray for the families that have lost a loved one. We can’t change the past, but our prayers can change the future. We can touch their lives with God’s love and grace, giving them the very gifts we’ve been given.