It’s amazing how having a puppy is like having a newborn baby. It’s not something that I had even considered before getting her. If I had I probably would have given up even the thought of it. As the mother of a 11 and 9 year old, sleep-filled nights are one of my favorite things about not having little ones anymore. There are many things that I miss from the baby and toddler stages, but not sleeping isn’t one of them. 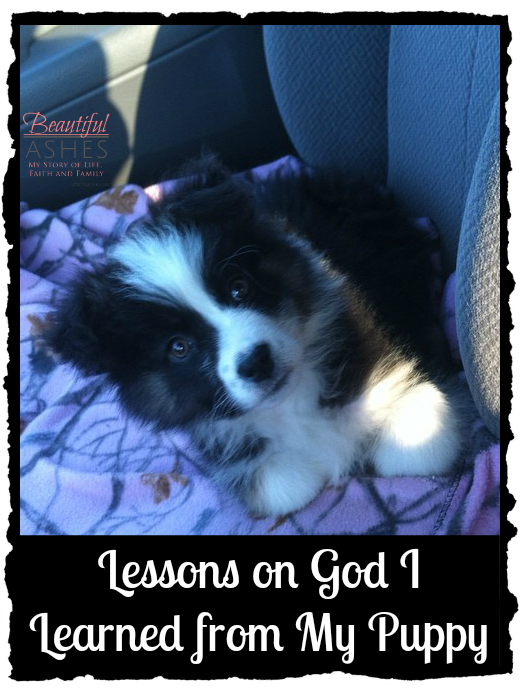 While I was up during the night recently with my puppy, I found myself praying and asking God to please just let her go back to sleep. As I said that prayer I realized that what I was dealing with is very similar to what God deals with in me.

I’m a child of God, but often I’m just like a puppy.

A puppy stands their ground refusing to take another step. I’m stubborn and have often refused to do things God’s way.

A puppy decides that they don’t want to sleep now, they want to play. I don’t accept the rest that He offers freely.

A puppy eats whatever they find no matter what the consequence may be later. At times I may do things that could make me ill (either physically or spiritually).

A puppy has accidents and though corrected doesn’t learn the first or thirtieth time. Making a mistake once doesn’t mean I’ve learned from it and won’t do it again.

At times a puppy follows it’s nose and forgets what it came outside to do. I get lost in my own things and wander away from the path I should be treading.

A puppy doesn’t see the time on the clock and know it’s time to eat soon, they’ll eat whatever is on the floor right now. Instead of waiting for the best things to come, I want what is here and now.

A puppy doesn’t realize that the path you’re taking them down leads to a warm house instead of an icy slope leading to frozen paws. Sometimes I don’t care that my way isn’t best, I just want to be in charge of my own life.

As a child of God, He’s always there for me.

He looks out for me. No matter the time of day or night, He always hears me when I call.

When I’ve wound myself up over and over, He chooses to be patient with me.

The countless times that I make the same mistake again and again, He offers an abundance of grace that I can’t even begin to understand.

God promises a future and a hope that I can’t see yet, no matter what my actions today may be that still remains true.

Even though I try and take charge of my own life, God always provides a way out of any disaster I get myself into.

While there are many things that I do that are similar to that of my puppy, I’m thankful for the fact that God is much more patient, loving and gracious than I am as a puppy mommy.

I’m thankful that puppy days don’t last forever and so I’m trying to enjoy every moment of them, just like I did with my children.

I’m thankful that my God is a God of many chances and that just because I’ve made mistakes in the past that it doesn’t mean I can’t try again today to do it the right way…His way.