Going from married then divorced, to single mom and next unwed mom, my life has seen some difficulties. Some of them were of my own making, due to stubbornness, pride and selfishness…others not so much. The next step on my journey was not expected and most definitely a “God thing”. 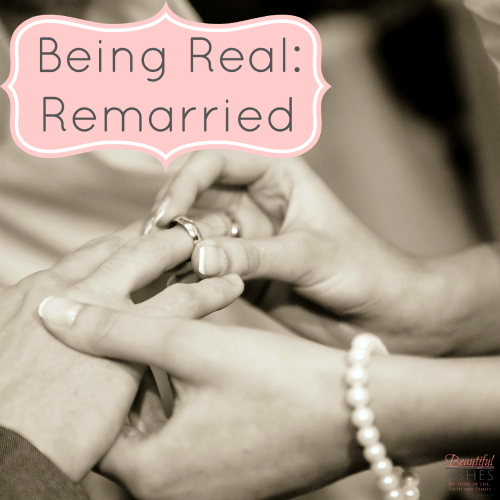 After you’ve said “I do” once and seen it come crashing down, getting remarried is a pretty scary topic. Toss in a past tainted with relational abuse like mine and it can be terrifying. Yet, when God is part of the process all of those things seem to fade away somehow, notice I said fade…not disappear. Choosing to trust someone enough to say “I do” again isn’t an easy task, it requires a letting go of things you can’t change like never before. It requires a level of peace and trust that only God can give. Getting remarried also means you’re going to have to grow some thick skin because at times you’ll need it. Some people don’t agree with Christians being remarried for any reason, so you have to be ready for those looks, questions or people that will just ignore you once the word “remarried” has become a label for you.

Getting remarried after a divorce is not something that is easily accepted nor do many people know how to handle it because of the history involved. It is a difficult choice and those that are remarried will face many struggles. Leaving the past behind, dealing with people judging you because they don’t want to take the time to know your messy life history, reminding yourself over and over again that your current spouse is not your ex is another struggle you face day after day. Choosing to remarry isn’t the right choice for everyone. People don’t do it because it’s easy…honestly it is harder than just having been married and divorced.

Remarried? Accept It As God’s Grace

God’s grace is an amazing thing, something that I’m very thankful for and yet don’t fully comprehend it. I truly see my current marriage as God’s grace being bestowed on me. While marriage is supposed to be for life, my first marriage didn’t turn out that way for many reasons. Yet, God sent me another man that He knew would be my perfect husband. One who would be patient as I grew beyond the ugly past, a man who has grown in the Lord himself through our marriage and who loves me in ways that I may not understand, but am learning to see them. God is good and He wants good for us, it’s when we get in His way that things go awry…though sometimes He allows us to learn from our mistakes, there are times that He showers us with His grace. If God has given you the gift of remarriage after a difficult past marriage, embrace it. Don’t worry about what others will think, if God is in the workings of it then praise and thank Him for second chances.